144% increase in Property Values in Sheffield since the Millennium

Sheffield house prices since the Millennium have risen by 144.8%, whilst average salaries in Sheffield have only grown by 51.27% over the same time frame. This has served to push homeownership further out of reach for many Sheffield people as they have to battle against raising considerable deposits and meet sterner lending criteria, as a result of new mortgage regulations introduced in 2014/5. The private rental market in Sheffield has grown throughout the last twenty years with buy-to-let investors purchasing a high proportion of newly built residential properties that were built and designed for the owner occupier sales markets. For example, in the Sheffield Brightside Constituency, roll the clock back 20 years and there were 34,712 properties in the Constituency, whilst the most recent set of figures (for Sheffield Brightside and Hillsborough) show there are 43,511 properties – a growth of 8,799 properties.

However, anecdotal evidence suggests that a large number of those 8,799 were bought by Sheffield buy-to-let landlords, as over the same 20-year time frame, the number of rental properties has grown from 1,589 to 4,940 in the Constituency – a rise of 3,351 properties. 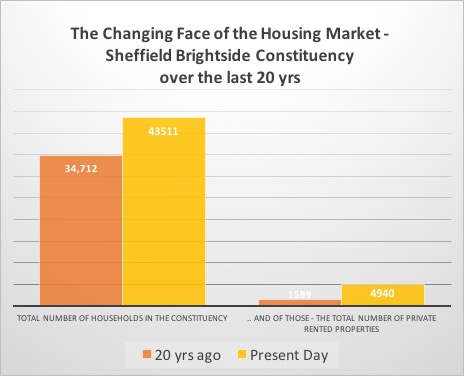 Nevertheless, some say this historic growth of the Sheffield rental market might start to change with the new tax rules for landlords introduced by Mr. Osborne over the last seven or eight months. Yet the numbers tell another story. Across the board, mortgage borrowing climbed to a 9 year zenith in March 2016 as the British property markets traditional Easter rush corresponded with landlords hurrying to beat George Osborne’s new stamp duty changes – buy-to-let landlords borrowed £7.1bn in March 2016 (the latest set of figures released) which was 163% up on the £2.7bn borrowed in the previous March.

You see, from my point of view, I don’t think things will get worse in the buy-to-let market in Sheffield and these are the reasons why I believe that:

Firstly, what else are Sheffield landlords going to invest in if it isn’t property – the stock market? Since the Millennium, the stock market has risen by an unimpressive total of 5.54%, quite different to the 144.8% rise in Sheffield property prices?

Secondly, its true the 3% stamp duty is the first blow on top of a number of other tax changes to be phased in between 2017 and 2021, such as landlords facing a constraint in their ability to offset mortgage interest and, if sizeable numbers of landlords do take the decision to sell their portfolios, this will lead to a substantial amount of second hand properties being put up for sale. Yet that might not be a bad thing, as I have mentioned in previous articles there is a serous shortage of properties to buy at the moment in Sheffield: the stock of property for sale being at a six year all time low.

.. Thirdly, if there are fewer rental properties in Sheffield, as supply drops and demand remains the same (although ask any letting agent in Sheffield and they will say demand is constantly rising) this will create a squeeze in the Sheffield rental market and as a result rents will rise. In fact, I predict even if landlords don’t sell up, Sheffield rents will rise as Sheffield landlords seek to compensate for increased costs, which means more landlords will be attracted back.

What’s Next for the Sheffield Property Market?

Sheffield Homebuyers & Landlords Set to Save £7,210,360 in Stamp Duty Over Next Nine Months